Some movement on Div 7A … at last! 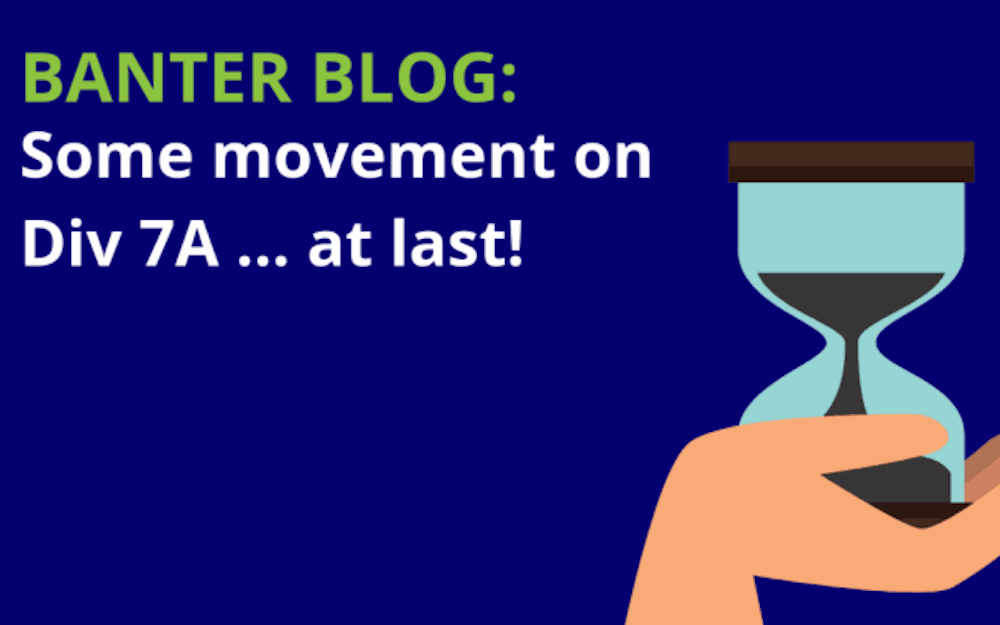 On 22 October 2018, the Treasury released a consultation paper titled Targeted amendments to the Division 7A integrity rules. The paper sets out the Government’s proposed implementation of the amendments to improve the integrity and operation of Div 7A of Part III of the ITAA 1936 (‘Div 7A’), and seeks submissions from interested parties by 21 November 2018. The outcome of this consultation will assist in the development of legislation required to implement the measures.

On 18 May 2012, the then Assistant Treasurer and Minister assisting for Deregulation, David Bradbury, announced that the Board of Taxation (‘the Board’) would undertake a post-implementation review of Div 7A.

The Board provided their final report to the Government on 12 November 2014, following the release of two interim discussion papers. The report, containing 15 recommendations, was released by the Government on 4 June 2015. But it wasn’t until 3 May 2016, as part of the 2016–17 Federal Budget, that the Government provided its response to that report.

In just a few paragraphs on page 42 of Budget Paper No. 2, under the heading Ten Year Enterprise Tax Plan — targeted amendments to Division 7A, the then Treasurer, Scott Morrison, announced that the Government would make targeted amendments to improve the operation and administration of Div 7A, drawing upon a number of recommendations from the Board’s post-implementation review of Div 7A.

The amendments were proposed to commence on 1 July 2018 and included:

As we rapidly approached the proposed start date of 1 July 2018 earlier this year, there was still no sign of any detail on the proposed measures. So it was not unexpected that on 8 May 2018, as part of the 2018–19 Federal Budget, the then Treasurer, Scott Morrison, announced that the Government would defer the start date of the proposed targeted amendments to Div 7A that were announced in the 2016–17 Budget from 1 July 2018 to 1 July 2019.

In addition to the above four previously announced reforms, the Government also announced that unpaid present entitlements (UPEs) will come within the scope of Div 7A from 1 July 2019. This will apply where a related private company is made presently entitled to a share of trust income as a beneficiary but has not been paid that amount. This measure will require that the UPE is either repaid to the company, managed as a complying loan or subject to tax as a dividend.

This would enable all of the Div 7A amendments to be progressed as part of a consolidated package. It is noted in the consultation paper that the ATO will need to provide online tools and administrative guidance to educate taxpayers on the new rules.

So … this will be 7 years in the making, and that assumes that there is no further deferral of the start date beyond 1 July 2019 (which happens to fall right in the middle of an election year).

So, what is the detail of the new measures?

The proposed amendments can be categorised into the following five headings:

This article does not purport to be a substitute for comprehensive training materials or provide a comprehensive analysis of the proposed legislative changes. Rather, it provides an overview of the Government’s position and intended policy on Div 7A from 1 July 2019.

Further, this article presumes that readers are familiar with the current law, so the existing position on each measure is not set out for context.

Under the proposed measures, a new 10-year loan model will be implemented for complying Div 7A loans. The key aspects of these new rules are set out in the table below.

There has been ongoing uncertainty about the application of Div 7A to non-resident private companies in certain circumstances, for example, whether it applies where the shareholder is also a non-resident, issues of ‘source’ and how Div 7A interacts with the transfer pricing rules and double tax treaties. The Government seeks feedback on the extent of any uncertainty and how best to remove any such uncertainty.

Under the proposed measures, where a UPE remains unpaid at the lodgment day of the company’s tax return, broadly from 1 July 2019, the UPE will be a deemed dividend from the company to the trust. Alternatively, the UPE can be managed as a complying loan.

3. Reviewing breaches of Div 7A

Taxpayers will be able to self-assess their eligibility for relief from Div 7A which will reverse the effect of a prior deemed dividend (replacing the current mechanism in s. 109R which requires taxpayers to apply for the Commissioner’s discretion to disregard a deemed dividend) without penalty. Only taxpayers who meet eligibility criteria will qualify for the self-correction relief.

Appropriate corrective steps must be taken within six months of identifying the error.

The current discretion in s. 109R will broadly be removed and will only be available where the taxpayer seeks the Commissioner’s discretion.

Addressing concerns that taxpayers have claimed the Commissioner is out of time to amend the relevant return to include a deemed dividend that arose outside the amendment period, it is proposed that a new 14-year review period will apply to Div 7A transactions from 1 July 2019.

The review period will cover 14 years after the end of the income year in which a deemed dividend arises or would arise. It is expected that the new 14-year review period would apply to Div 7A transactions happening from 1 July 2019, but this is not explicitly stated in the consultation paper.

4. Safe harbours — provision of assets for use

Since the introduction of s. 109CA (about the use of company assets), it has been difficult to determine the arm’s length value of the use of an asset.

It is proposed that a safe harbour be introduced in the form of a legislative formula which would apply a benchmark interest rate to the value of the asset (as at 30 June for the year in which the asset was used). Taxpayers would still be able to calculate their own arm’s length value instead of applying the legislative formula. The safe harbour will apply for the exclusive use of all assets except motor vehicles.

The consultation paper includes a number of proposed changes to improve the integrity and operation of Div 7A while increasing certainty.

Consultation questions included in the paper

The consultation paper contains six consultation questions, comprising 23 sub-questions. These are set out below.

Submission to The Treasury

TaxBanter will be making a submission on the proposed changes to Div 7A. We invite you email us with any issues which should be considered for inclusion in our submission.
Please email: enquiries@taxbanter.com.au by Wednesday 7 November 2018.